Supper tonight made good use of the recipes from cooking camp. I didn’t think round 2 would be this soon. I can’t believe I made even more tortillas, but I did. I do not own a KitchenAid mixer and dough hook, so I kneaded the dough. . . I don’t know if that was a good idea or not, but my little sister was asking for seconds, so it must have been alright. I also made the salsa of which my dad was a big fan (he discovered at the banquet when camp ended), and turned the tortillas into quesadillas. 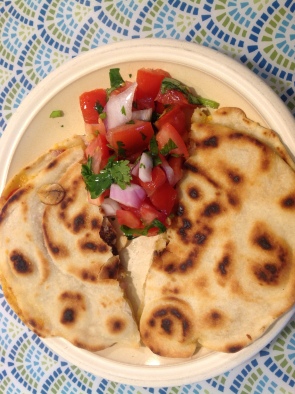 I recall learning last year in school that eating a good meal raises your levels of dopamine by 50%. Just a fun fact that came to mind.

Last night I spontaneously decided to go to the movies, and I’m glad I did. I didn’t think I could cry at a movie about food, but The Hundred-Foot Journey is about more than just food, and is absolutely spectacular. It’s great when you see a really good movie, because so many of them are just no good. The story of a family from India moving to Paris and boldly opening a restaurant across the street from another restaurant of opposite style is a daring move, but chef Hassan impresses all of France with his deliciously innovative cooking. I’d say the entire theatre was probably inspired to go home and experiment with spices.

So, inspired by The Hundred-Foot Journey’s “five sauces” of French cuisine, and the band Five Seconds of Summer, I came up with the play on words: 5sos = 5 Sauces of Summer. My plan is to make all five at some point during what’s left of the summer. We’ll just see how that goes. 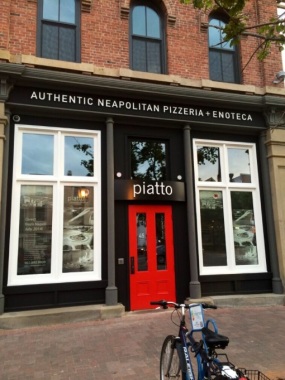 Recently, a friend of my parents’, Ryan, opened a pizzeria called Piatto. Unfortunately, my parents neglected to take me the first time they went, so I just had to listen to how amazing it was and wait until I could actually go. I finally did go yesterday, but before I describe it, here’s a coincidence: Meg McNeil, the fabulous assistant chef from Culinary Bootcamp, also works at Piatto! So, Piatto itself. . . The restaurant is quite impressive. Specific features being bikes in the restaurant, red lights hanging from the ceiling, an interesting fan, and a huge oven. This oven is apparently far from ordinary. Well, unless your ordinary oven cooks pizzas in 90 seconds at 900 degrees farenheit.

This time I got a barbecue chicken pizza which was delicious, especially the caramelized onions- I’m planning on there being lots of “next times”! Also, yesterday’s salad was the first time I have tried artichoke hearts- discovery: they’re good. I know I didn’t actually make this food, but maybe (hopefully) one day, if I’m qualified enough, I will work there and then I can blog again but it will be even more impressive. 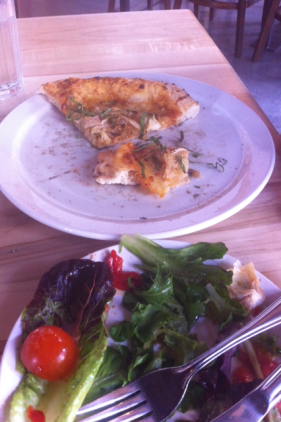 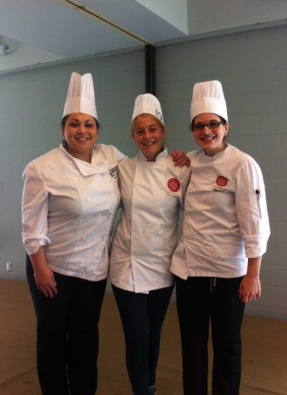 From Monday, until today, I have to say this was the highlight of my summer so far. I wish I could stay in that kitchen for the rest of my life.

For starters, I met some utterly amazing people this week, including Chef Ilona Daniel, Meg McNeil, Karen Wortman, and so many fun kids that I hope to see again next year.

The first thing we did on Monday was take a Limo Bus (new ultimate way to travel!) to Green Gables, where we made butter and ice cream. I never knew making butter was so simple: all we did was shake it. First it turned into whipped cream, then all of a sudden it was butter.

On Tuesday morning, I made tortillas- lots of tortillas. It was interesting to make things in such big amounts. My own kitchen looks pathetic now, compared to Holland College. Then in the afternoon, we made oatmeal molasses cookies. Later to become the best ice cream sandwiches I have ever tasted.

Next day: the morning was spent chopping onions, mincing garlic, and stirring sauce. In the afternoon, I was supposed to make truffles, but do to shortage of ingredients, I made No-Bake Cheesecakes instead. Made with cream cheese, condensed milk, lemon juice, and vanilla extract. It turns out that was a good plan, because apparently I wasn’t at all bad at that job. (Except when opening cans of condensed milk. That turns out to be a very easy opportunity for fingers to get sliced.)  So the next morning, I made some more. The first ones were authentically non-baked, having Oreos as the base, but the second batch had brownies as the base, which were, in fact, baked, so that was kind of cheating. And I swirled some melted chocolate on top. One can never have too much chocolate.

One of the last main things I did was assemble enchiladas, and that was good, except when the tortillas were made by someone who doesn’t quite know the shape or thickness that a tortilla is supposed to be. Then it was a tad more difficult.

In all honesty, I think I might have cried if I couldn’t come back next year. This blog post didn’t even do it justice. 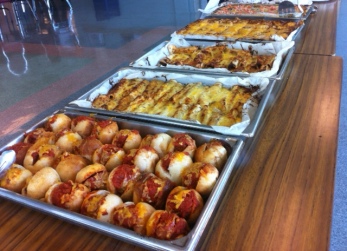 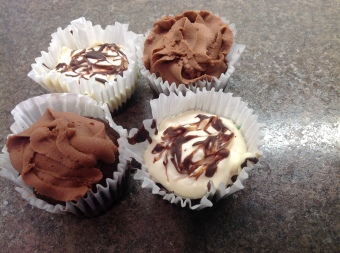 (two of these are the infamous cheesecakes) 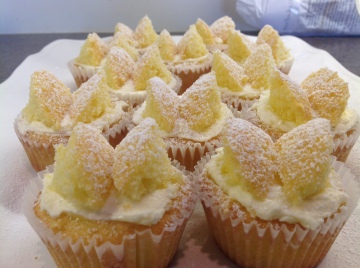 My first paid order! Here’s how it came about: I made lemon Butterfly Buns based on a recipe by Mary Berry which featured lemon curd underneath buttercream icing, underneath the “wings” of the butterflies. The cake itself had lemon zest in it, so the icing didn’t, and I also sprinkled them with icing sugar, which has a surprisingly significant effect. So my mum posted a picture of them on Facebook, and someone saw them and decided they wanted a dozen for the next Sunday. I quite enjoy making them, but I guess they’re hard to make exactly equal. Cutting the top off can result in some being deeper than others, etc. Also, it can get tedious making these old British recipes, because everything is measured in ounces. It turns out this recipe goes by many names, not only being called Butterfly Buns, but Fairy Cakes, Angel Cakes, and Maids of Honour. While I was making the second batch, friends of my parents were over, and something tells me I might be getting another order sometime in the future.

Definitely one of the best smells ever is the one that happens when you walk into Cows. P.E.I’s best, Canada’s best, The World’s best. Enough said. If you haven’t tried it, you’re missing out. (Today felt like a Wowie Cowie kind of day.) 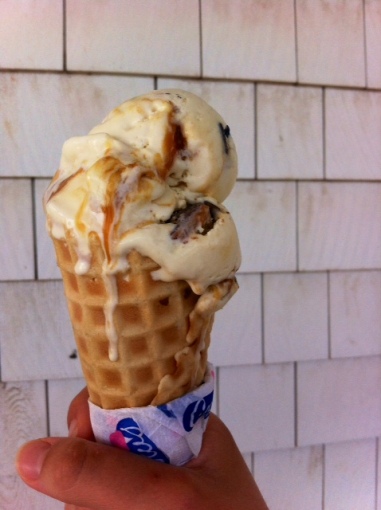 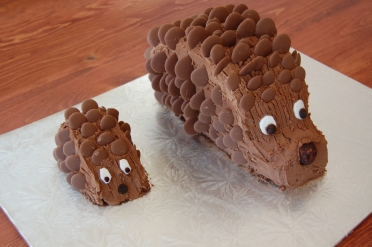 Why not? They were a challenge, but most good things are. The chocolate cake I think was the best I’ve ever made, and using the Bethany Cake recipe. So I made the cake the night before, and the decorating took me all night. Somewhere online, I was told to cut off a quarter of the cake from both sides, and stand it upright on the top. well, it was too wide, so I only used two-thirds of that amount. The rest, I used to make a snout and a baby hedgehog! The whole process used, like, four batches of chocolate buttercream – I need to use a bigger recipe. Covering the entire thing with chocolate buttons, big and small, was quite fun, but also a bit of a race against the sun: on a summer’s day, that much chocolate has a tendency to melt. Everyone at my 4-year-old cousins’ birthday was highly satisfied, though. The eyes and nose of the big hedgehog were made of fondant, and the baby’s nose was a chocolate chip. They were quite messy/difficult, but they looked adorable in the end. 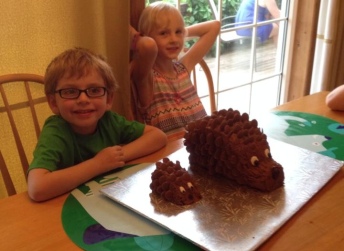 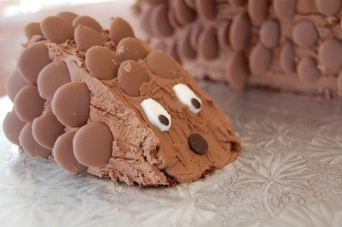 A large portion of my life is devoted to obsessions. Usually the latter would be a book/movie franchise. On several past occasions, I have baked in recognition of something I love – once for The Hunger Games, more than once for Harry Potter. This time, I am baking for John Green, Young Adult author/genius. I’m not going to go on about how much I love his book, The Fault in our Stars, because I can’t. And that would lead into a rant about all the books I love, and which ones have shaped my childhood, and which ones have changed me, and I would sit here for hours trying to do them all justice. So I’ll just stick to the baking. That is, after all, what this blog is supposedly about.

Now, cupcakes. The cake mixture is a Be-Ro sponge cake, and the icing is half  and half. For half of them I used icing sugar and water, and for the other half, dark chocolate ganache. They tasted faultless, but the presentation was greatly important. I went to the trouble of acquiring a sky blue background, and staying up half the night icing the words. Note: After twenty-two times spelling a word, it begins to look strange. 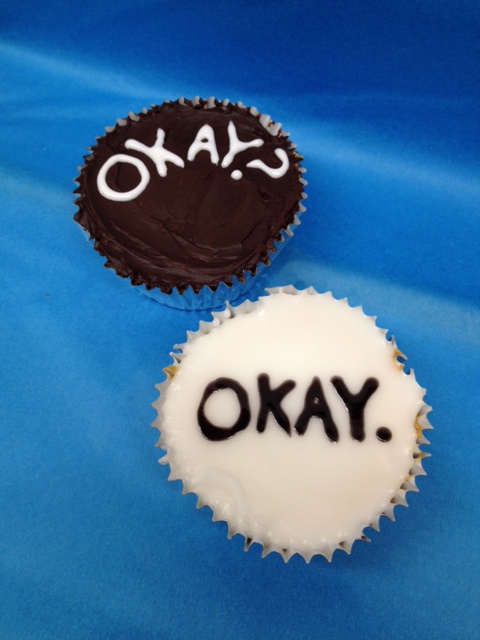 At my school, I am part of the French Club, who goes on a week-long trip at the end of the year. So our trip was to Ottawa and Montreal. While we were there, I got the chance to try some foods I previously had not known about. First of all, there was a superb breakfast consisting of blueberry crepes, scrambled eggs, and fruit. A bigger breakfast, I have never set eyes upon: I couldn’t even eat it all! 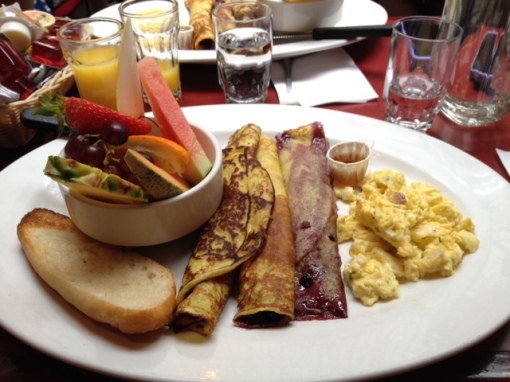 Before my visit to Montreal, I had never eaten a smoked meat sandwich. I can now say I have. Having had no idea what it was, I can describe it as beef that is prepared during two weeks, then the spices etc. are removed, and it is served as a pile of very fine slices between two pieces of bread. It wasn’t bad, but I couldn’t have eaten another one.

On our last night, we went to a “Cabane à Sucre” or “Sugar Shack”. That was quite an experience, let me tell you. Everything served in La Cabane is eaten with maple syrup. Well, except the soup. But as far as I know, there could have been maple syrup hidden in that as well. They served pies, beans, eggs, and ham, and all were to be eaten with maple syrup – it was crazy! But it was surprisingly good… (especially dessert!) 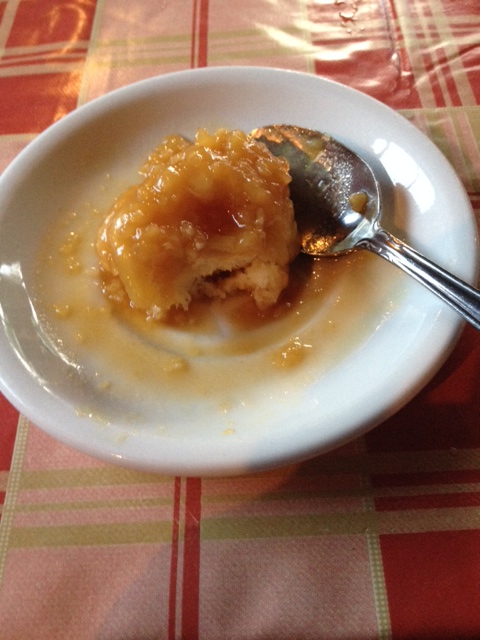 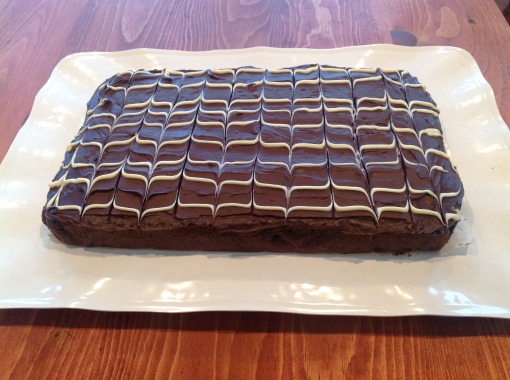 I decided to try a Mary Berry Chocolate Tray Bake recipe, because I had seen her make it on TV and it looked sensational. Mine was not a good as her’s, because I did not have time for such precision, as I was on my way to a step dancing concert. However, it was still pretty impressive – I’ve never done feathered icing before. As they say, “you learn something new every day”. The bottom is basically like chocolate cake, the decoration is melted white chocolate, and the icing is ganache, which I’ve made before. This time around, though, I learned a story of how ganache was invented. Apparently ganache is French for “fool”, so that’s what a French chocolatier called his apprentice when he accidentally spilled cream into the chocolate he was stirring. (Observation: You learn more than one thing every day.) Final touches of white chocolate with a toothpick dragged through systematically was what gave it its posh look. Although it would have been neater had I had more time. Anyhow, it was quite delicious. 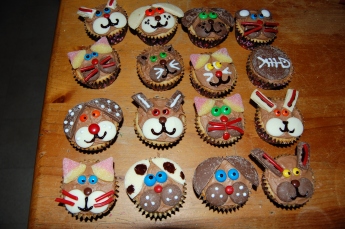